Who is Michael Colantoni?

A good place to start is my LinkedIn page at

I took my first trade while at university in 1980 (Mining Houses of Australia).
Unfortunately for me, the trade paid off handsomely. I thought trading was easy.
Fortunately, I was busy with my first career over the next 15 years, so I did not
trade except for one trade in 1983 which was a loss, and another in September 1987
– yep, September 1987. The next trade was in 1996 in Westpac which was a
spectacular success. By then I was working in my own company. Inspired by this
success, I went on to lose a lot of money over the next 7 or 8 years.

I worked for Lend Lease for 14 years. After that, I had my own company doing
property stuff from 1994 until 2003. Then I switched to a dedicated life as a trader.
I had, in the intervening 10 years before that, collected an impressive library of
books on psychology, finance, economics and, particularly, the art and science (and
philosophy) of trading. I read them all, some several times. I still have an extensive
library which keeps growing.

I became particularly interested in Gann and Elliott. I had been studying with Colin
Nicholson for some years, so I looked up David Bowden and Robert Prechter. I
studied first with Prechter from 1999, then with Bowden in 2006. So, I became
terribly sophisticated. At least I had stopped losing money and I was creeping slowly
onto the positive side of the ledger.

As you might imagine, my analysis became very involved and complicated. It was quite
effective but eventually I started thinking that these tools, as great as they are, are
sophistications rather than the basis of trading. I continued to use them but
gradually made my core work simpler, adding these more as filters or as ways of
identifying what I call a Point of Interest on a chart that may bear looking at with
other tools. I think “market behaviour” is my favourite catchphrase. At the end of
the day, that’s what I watch once I have identified a Point of Interest.

Back in 2007, I think it was, I got involved with Alan Oliver. You may know of him. I
was living in Sydney, so I got all his material and studied it. That was it until 2010.
Then I moved to Byron Bay where I lived for the next seven years. So I was able to
attend Alan’s meetings each month in Brisbane. Eventually, he and I became good
friends. I moved back to Sydney in 2017. When Covid hit, Alan switched to Zoom
meetings, so I was able to take part again from Sydney and Alan asked me to do some
presentations in these meetings. I discovered that I enjoyed doing those and they
were well received by his students. So I have continued to do that.

The other thing that I started doing in 2019 was to take on selected students. I
wanted to take aspiring or existing traders with the right mindset, commitment, and
intelligence, and teach or mentor them to be successful technical traders. I wanted
to do this face-to-face, one-on-one. I have been doing that since then except for a
rather major interruption due to the pandemic.

I am also putting together what I hope will end up as a book – another unexpected
challenge. It will also be called “The Simple Trader”. I am convinced that the power
we have in trading lies not in sophisticated analysis, or in being “right”, but in simple
analysis, reliable expectancy, intelligent trade management and disciplined trade
sizing. I also put psychology, especially belief, right up at the top of the list.

One of the wisest things I have heard in my travels through trading life is something
Alan said one day over coffee. “A line is just a line until price reacts to it.” Those
simple, innocuous words encapsulate for me the foundation of technical analysis. I say
two things to students over and over. First, “You don’t make money by getting into a
trade. You make money by getting out – at the best possible time.” Second, “We
anticipate, we don’t predict.” Trading is about anticipation, preparation, and
management. Our power is not in the setup. It’s in what comes after that. It’s also in
the trades you do not take.

I think I would describe myself as a short-term technical trader. I lean towards
continuation trades with a preference for breakouts and breakdowns, although I do
love to catch the end of zig-zag corrections (my main take-away from Elliott). I also
still use Gann’s tools to find and support Points of Interest. My other two points are
the Point of Confirmation and the Point of Contradiction.

One of the things that I love about trading is that it teaches you about yourself. It
also takes you into a whole range of other fields such as finance, politics, psychology,
systems thinking and more esoteric areas. Prof Bill Williams took it into almost
mystical regions with his Chaos Theory application and his emphasis on meditation.

Alexander Elder
Trading methodology
Use of indicators
Use of moving averages

CMT 1 course in 2019
I passed the Chartered Market Technician course part 1 in 2019 with coaching from
Mathew Verdouw. I will not be pursuing the final parts 2 and 3 as they are relevant to
technicians seeking to do consulting and analysis for commercial enterprise clients.

I helped Robert Prechter out with his work in 2004, so he sent me his latest book
with his thanks: 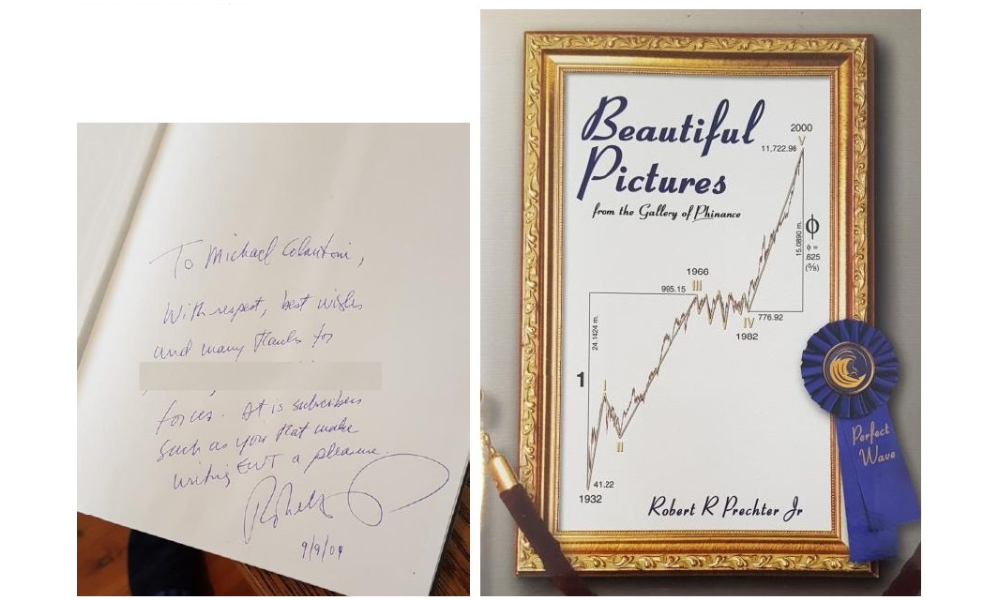 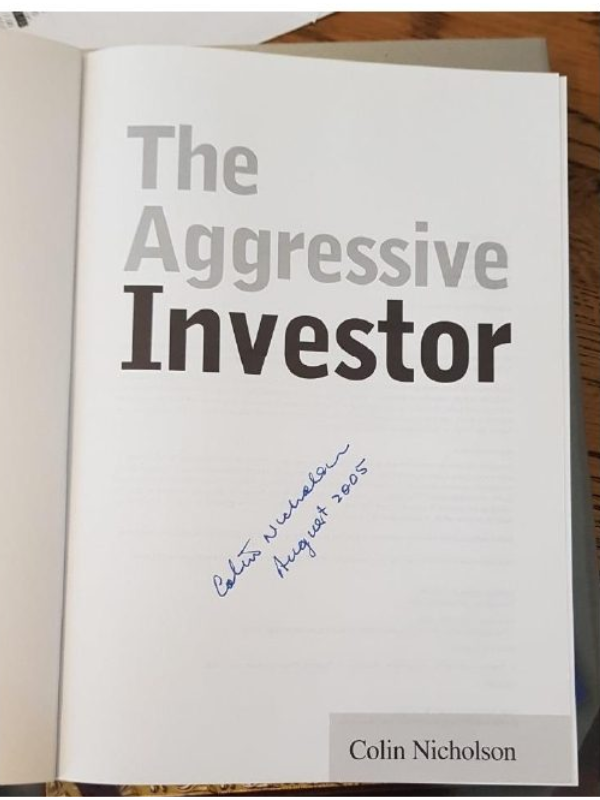 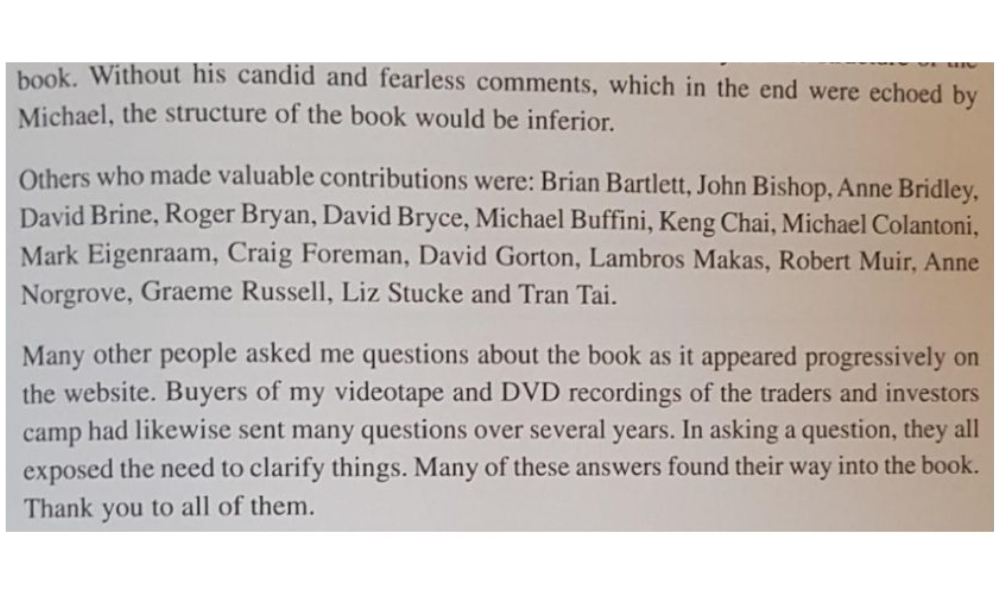 I studied with David Bowden and his crew at Hubb’s – Safety in the Market Platinum
Course 2006/7 and then the Master Forecasting Course in 2007. This covered
advanced Gann studies. 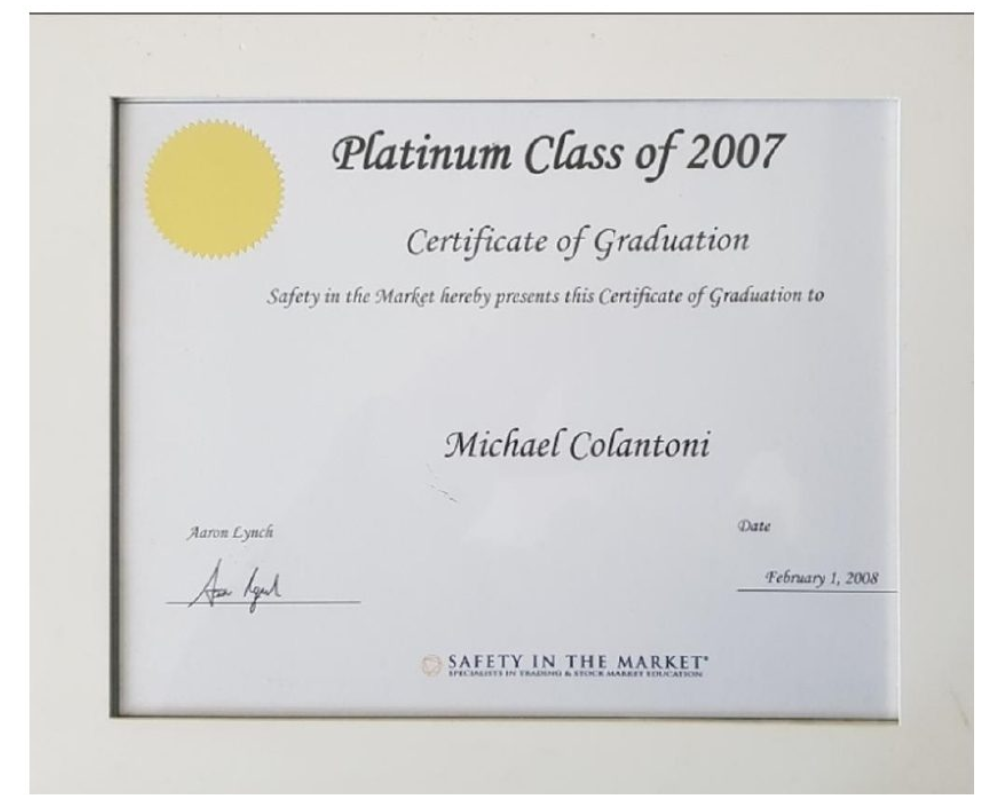 Since then, I have studied with Alan Oliver. We exchange ideas and gripes quite
regularly.
I will never quit the markets. I have developed a strong interest in teaching so I
would like to keep doing that both face to face and in printed and recorded forms.